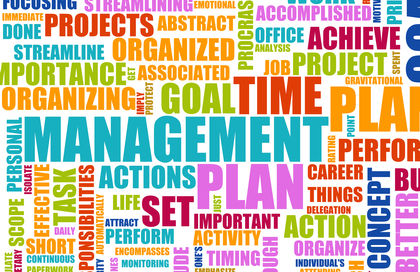 Scheduling pertains to establishing both the timing and use of resources within an organization. Under the operations function (both manufacturing and services), scheduling relates to use of equipment and facilities, the scheduling of human activities, and receipt of materials.

While issues relating to facility location and plant and equipment acquisition are considered long term and aggregate planning is considered intermediate term, operations scheduling is considered to be a short-term issue. As such, in the decision-making hierarchy, scheduling is usually the final step in the transformation process before the actual output (e.g., finished goods) is produced. Consequently, scheduling decisions are made within the constraints established by these longer-term decisions. Generally, scheduling objectives deals with tradeoffs among conflicting goals for efficient utilization of labor and equipment, lead time, inventory levels, and processing times.

Byron Finch notes that effective scheduling has recently increased in importance. This increase is due in part to the popularity of lean manufacturing and just-in-time. The resulting drop in inventory levels and subsequent increased replenishment frequency has greatly increased the probability of the occurrence of stock-outs. In addition, the Internet has increased pressure to schedule effectively. "Business to customer" (B2C) and "business to business" (B2B) relationships have drastically reduced the time needed to compare prices, check product availability, make the purchase, etc. Such instantaneous transactions have increased the expectations of customers, thereby, making effective scheduling a key to customer satisfaction. It is noteworthy that there are over 100 software scheduling packages that can perform schedule evaluation, schedule generation, and automated scheduling. However, their results can often be improved through a human scheduler's judgment and experience.

With backward scheduling, the scheduler begins with a planned receipt date or due date and moves backward in time, according to the required processing times, until he or she reaches the point where the order will be released.

Of course there are other variables to consider other than due dates or shipping dates. Other factors which directly impact the scheduling process include: the types of jobs to be processed and the different resources that can process each, process routings, processing times, setup times, changeover times, resource availability, number of shifts, downtime, and planned maintenance.

Loading involves assigning jobs to work centers and to various machines in the work centers. If a job can be processed on only one machine, no difficulty is presented. However, if a job can be loaded on multiple work centers or machines, and there are multiple jobs to process, the assignment process becomes more complicated. The scheduler needs some way to assign jobs to the centers in such a way that processing and setups are minimized along with idle time and throughput time.

If the firm has limited capacity (e.g., already running three shifts), finite loading would be appropriate since it reflects an upper limit on capacity. If infinite loading is used, capacity may have to be increased through overtime, subcontracting, or expansion, or work may have to be shifted to other periods or machines.

There are a number of priority rules or heuristics that can be used to select the order of jobs waiting for processing. Some well known ones are presented in a list adapted from Vollmann, Berry, Whybark, and Jacobs (2005):

These rules assume that setup time and setup cost are independent of the processing sequence. However, this is not always the case. Jobs that require similar setups can reduce setup times if sequenced back to back. In addition to this assumption, the priority rules also assume that setup time and processing times are deterministic and not variable, there will be no interruptions in processing, the set of jobs is known, no new jobs arrive after processing begins, and no jobs are canceled. While little of this is true in practice, it does make the scheduling problem manageable.

Gantt charts are named for Henry Gantt, a management pioneer of the early 1900s. He proposed the use of a visual aid for loading and scheduling. Appropriately, this visual aid is known as a Gantt chart. This Gantt chart is used to organize and clarify actual or intended use of resources within a time framework. Generally, time is represented horizontally with scheduled resources listed vertically. Managers are able to use the Gantt chart to make trial-and-error schedules to get some sense of the impact of different arrangements.

There are a number of different types of Gantt charts, but the most common ones, and the ones most appropriate to our discussion, are the load chart and schedule chart. A load chart displays the loading and idle times for machines or departments; this shows when certain jobs are scheduled to start and finish and where idle time can be expected. This can help the scheduler redo loading assignments for better utilization of the work centers. A schedule chart is used to monitor job progress. On this type of Gantt chart, the vertical axis shows the orders or jobs in progress while the horizontal axis represents time. A quick glance at the chart reveals which jobs are on schedule and which jobs are on time.

Gantt charts are the most widely used scheduling tools. However, they do have some limitations. The chart must be repeatedly updated to keep it current. Also, the chart does not directly reveal costs of alternate loadings nor does it consider that processing times may vary among work centers.

The scheduling of services often encounters problems not seen in manufacturing. Much of this is due to the nature of service, i.e., the intangibility of services and the inability to inventory or store services and the fact that demand for services is usually random. Random demand makes the scheduling of labor extremely difficult as seen in restaurants, movie theaters, and amusement parks. Since customers don't like to wait, labor must be scheduled so that customer wait is minimized. This sometimes requires the use of queuing theory or waiting line theory. Queuing theory uses estimate arrival rates and service rates to calculate an optimum staffing plan. In addition, flexibility can often be built into the service operation through the use of casual labor, on-call employees, and cross-training.

Scheduling of services can also be complicated when it is necessary to coordinate and schedule more than one resource. For example, when hospitals schedule surgery, not only is the scheduling of surgeons involved but also the scheduling of operating room facilities, support staff, and special equipment. Along with the scheduling of classes, universities must also schedule faculty, classrooms, labs, audiovisual and computer equipment, and students. To further complicate matters, cancellations are also common and can add further disruption and confusion to the scheduling process.

Instead of scheduling labor, service firms frequently try to facilitate their service operations by scheduling demand. This is done through the use of appointment systems and reservations.

Kreipl, Stephan and Michael Pinedo. "Planning and Scheduling in Supply Chains: An Overview of Issues in Practice." Production and Operations Management 13, no. 1 (2004): 77–92.