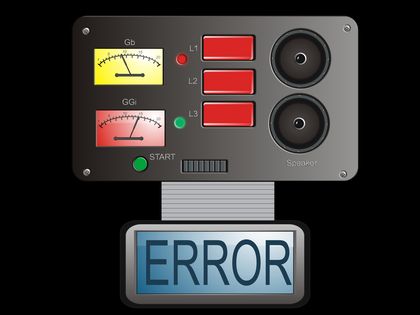 Poka-yoke is a technique for avoiding simple human error in the workplace. Also known as mistake-proofing, goof-proofing, and fail-safe work methods, poka-yoke is simply a system designed to prevent inadvertent errors made by workers performing a process. The idea is to take over repetitive tasks that rely on memory or vigilance and guard against any lapses in focus. Poka-yoke can be seen as one of the three common components of Zero Defect Quality Control performed by Japanese companies (source inspection and feedback are the other two).

Dr. Shigeo Shingo, a renowned authority on quality control and efficiency, originally developed the mistake-proofing idea. Realizing its value as an effective quality control technique, he formalized its use in Japanese manufacturing as the poka-yoke system. One hundred percent inspections catch unacceptable products but do nothing to improve the process. Shingo was emphatic that the purpose of this system be to improve the process not sort out defective parts.

Today, this concept is in wide use in Japan. Toyota Motor Corporation, whose production system Shingo helped design, averages twelve poka-yoke devices per machine in their manufacturing plants, thus validating the concept as beneficial to industry. Patel, Dale, and Shaw, in the article "Set-Up Time Reduction and Mistake Proofing Methods: An Examination in Precision" list the potential benefits as:

In a Quality magazine article, Melissa Larson provides interesting details about benefits resulting from the implementation of poka-yoke systems at the Supply Support Activity (SSA) at Fort Carson, Colorado, a military retail supply operation of the U.S. Army.

Inventory, receipt, and batch processing all improved quantifiably. Location survey accuracy was approximately sixty-five percent prior to implementation. After implementing the use of the bar-code readers location accuracy increased to ninety-eight percent. Inventory adjustments averaged $3000 a month. Inventory adjustments dropped to an average of $250 per month.

The rate of incorrect receipt closures to the supplier had been ninety percent. This rate dropped to zero percent. Batch processing was also significantly improved. Traditionally, the SSA had approximately fifteen to twenty batch processing failures per month, and a myriad of system file failures due to operators performing the process out of proper sequence. Since the poka-yoke implementations, there have been zero batch process failures.

Poka-yoke is based on prediction and detection. That is, recognizing that a defect is about to occur or recognizing that a defect has occurred. Consequently, there are two basic types of poka-yoke systems. The control poka-yoke does not allow a process to begin or continue after an error has occurred. It takes the response to a specific type of error out of the hands of the operator. For example, a fixture on a machine may be equipped with a sensing device that will not allow the process to continue unless the part is properly inserted. A 3.5-inch floppy disk will not work if inserted backwards or upside down. As a matter of fact, it won't fit into the drive at all unless properly inserted. A second type of poka-yoke provides some type of warning when an error occurs. This does not prevent the error, but immediately stops the process when an error is detected. This type of poka-yoke is useful for mass production environments with rapid processing as the device prevents mass production of scrapped material. For environments where large losses of time or resources do not result, a warning poka-yoke is warranted. All that is needed is a way to ensure that the error is investigated and corrected in a timely manner.

Poka-yokes can be as simple as a steel pin on a fixture that keeps incorrectly placed parts from fitting properly, or they can be as complex as a fuzzy logic neural network used to automatically detect tool breakage and immediately stop the machine. Surprisingly, the simple low-cost devices tend to be in the majority. Regardless of degree of simplicity, all poka-yokes fall into one of three categories: contact methods, fixed-value methods, and motion-step methods. Each is briefly discussed.

Contact methods are based on some type of sensing device which detects abnormalities in the product's shape or dimension and responds accordingly. Interference pins, notches with matching locator pins, limit switches and proximity switches are sometimes used to ensure that a part is positioned correctly before work occurs. Asymmetric parts with matching work fixtures can also alleviate incorrect positioning. If orientation is not critical, symmetrical designs can then be used to prevent defects.

Fixed-value methods are used in processes where the same activity is repeated several times, such as tightening of bolts. This method frequently involves very simple techniques, such as methods that allow operators to easily track how often this activity has been performed. Dvorak gives the example of an operator who is responsible for tightening down six bolts on a product. Before passing the product on, the tightening process is performed a fixed number of times (six). A simple poka-yoke device would incorporate the use of a wrench dipped in diluted paint. Since untightened bolts will not have paint on them, the operator can easily see if he or she has performed the process the required number of times. A second example (from Dvorak) would be the use of packaged material in the exact (fixed) quantities needed to complete the process. If the bolts were stored in containers of six, the operator could easily see when the process was still incomplete as the box would still contain one or more bolts.

process is identified by the specific motions needed to complete it. Then devices are created to detect whether each motion is performed and then alert the operator when a step is skipped. An assembly process could utilize a device that senses when all required components are present at the start of the process for each unit. The devices could then detect when each component is removed from its dispenser, If a component is not removed, the sensing device alerts the assembler before he/she can move on to another unit.

Poka-yoke devices which provide the fastest possible feedback about defects and allow workers to assess the quality of their own work are referred to as self-checks. Self-checks can be used to allow workers to rapidly identify slips or work errors such as incomplete or omitted operations and to verify the existence or absence of an attribute. For example, at Brigham and Women's Hospital, a computer system is used to check and process doctors' prescriptions.

A number of "real world" applications are presented in the business and engineering literature. Below are a list of examples of poka-yoke applications. James R. Evans and William M. Lindsay present these examples in their book The Management and Control of Quality:

Poka-yoke can also be applied to service-based organizations. The following is summarized from the paper "Using Poka-Yoke Concepts to Improve a Military Retail Supply System," which was printed in Production and Inventory Management Journal.

There are three types poka-yoke systems that can be used to fail-safe the server: task poka-yokes, treatment poka-yokes, and tangible poka-yokes.

Task poka-yokes focus on server tasks and common mistakes servers make while performing the service/task for the customer. A good example of a control-oriented, task poka-yoke is the coin return machine used in may fast-food restaurants. The coin portion of a customer's change from payment is returned automatically through these machines. This takes the control out of the hands of the cash register operator, eliminating errors and speeding up the processing of customers.

Treatment poka-yokes focus on the social interaction between the customer and the server (i.e., eye contact, greeting). By mistake-proofing/standardizing what servers say and do to customers, managers can reasonably ensure that customers receive proper, fair and consistent treatment. Burger King utilized warning-oriented, treatment poka-yokes by placing "cue cards" at the service point ensuring that servers know what to say the minute they interface with the customer.

Tangible poka-yokes attempt to improve the tangible, physical impression and experience for the customer in addition to the direct task of the server (i.e., dirty office, unkempt server, sloppy documents). Motorola uses a control-oriented poka-yoke in the legal department by having a second lawyer inspect all legal work for spelling, presentation, and arithmetic. In this way, the legal department is ensuring that the "tangibles" of the service are satisfactory in addition to the task of the service (legal work).

Preparation poka-yokes attempt to fully prepare the customer before they even enter the service. An example of a warning-oriented, preparation poka-yoke is the notice a university sends to each student prior to registration for the next semester detailing the courses he needs to finish his degree. This system could be converted to a control system by having an automated registration process which would not allow students to sign up for classes out of sequence or until all prerequisites are met.

Encounter poka-yokes attempt to fail-safe a customer at a service who may misunderstand, ignore, or forget the nature of the service or their role in it. A good example of a control-oriented, encounter poka-yoke is the use of concrete curbing at an oil& lube shop that directs customers so that they do not/cannot pull the wrong way into the station. This system also assists in the selection process so that customers are not served out of order.

Resolution poka-yokes attempt to remind customers of the value of their input to the continuous improvement of a service. A hotel which uses an automated check-out system through the television in each room could attach a few questions to the check-out process to ensure the customer provides feedback on key issues. This would be a control-oriented resolution poka-yoke. Obviously, one of the keys to the success of any customer-oriented poka-yoke is to obtain willing customer participation.

BARRIERS TO IMPLEMENTATION
AND RECOMMENDATIONS

Patel, Dale and Shaw note that there are a number of barriers a firm may face when implementing poka-yoke devices within their system. These include:

Stewart and Grout, in an article entitled "The Human Side of Mistake-Proofing," make the following recommendations for the implementation of poka-yoke devices:

John Grout attributed defects to three sources: variance, mistakes, and complexity. Complexity requires techniques which simplify the process while managing variance can be accomplished by utilizing statistical process control (SPC). However, if quality problems are the result of mistakes, poka-yoke devices are the appropriate technique to use. In this case, poka-yoke provide an even more effective quality improvement tool than SPC. Other poka-yoke benefits include reduced training costs and the advantage of freeing workers' time and minds for more creative and value-adding activities.

Circumstances where poka-yoke is not the appropriate response are situations involving high speed production, situations where X-bar (Χ̅) & R charts are effective, and use in destructive testing. Other situations, however, provide opportunities for simple, inexpensive, and fail-safe devices to improve performance. Grout relates the example of Lucent Technologies, which reported that half of their 3,300 mistake-proof devices cost less than $100. However, they estimate a net savings of $8.4 million or about $2,545 per device. Poka-yoke is a most impressive and powerful tool.

Dear all,
I am preparing a training material about POKAYOKE for a manufacturing nidustry.I would like to start with some pokayoke games and I would like to add some videos in that PPT.

Can you please send me if you have anything reated to this.Pl send it to my mail id.