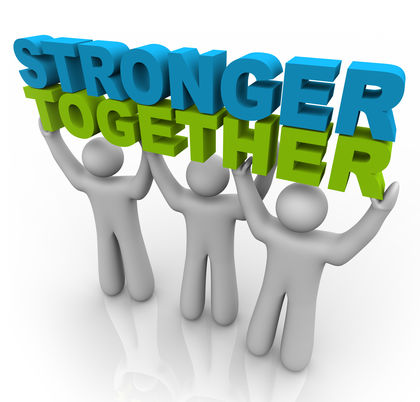 Synergy, also known as synergism, refers to the combined effects produced by two or more parts, elements, or individuals. Simply stated, synergy results when the whole is greater than the sum of the parts. For example, two people can move a heavy load more easily than the two working individually can each move their half of the load. Synergy can be a positive or negative outcome of combined efforts.

According to the American Heritage Dictionary , the term "synergy" is derived from the Greek word sunergos , meaning "working together." Positive synergy is sometimes called the 2 + 2 = 5 effect. Operating independently, each subsystem can produce two units of output. However, by combining their efforts and working together effectively, the two subsystems can produce five units of output.

Negative synergy can be called the 2 + 2 = 3 effect. Again, individuals operating alone can each produce two units of output. However, with negative synergy, the combination of their efforts results in less output than what they would have achieved if they had each worked alone. Negative synergy can result from inefficient committees, business units that lack strategic fit, and from other poorly functioning joint efforts.

Synergy has origins as a theological term describing the cooperation of human effort with divine will. In recent years the term has most often been used in association with systems theory. Systems theory, as applied to biology and the physical sciences, describes the interdependence of various parts of an organism, such as the human body. The human body, as a system, is comprised of a set of interrelated subsystems, including the brain, skeleton, muscles, and others. To fully understand the larger system, one must examine the subsystems and the interrelationships. Systems theory was one of the first management theories to explicitly state that changing one of the subsystems could have an impact on the total system. Synergy was developed as a measure of the effectiveness of the joint efforts of various subsystems. Discussions of synergy also figure in medical literature, such as in research that addresses how the effects of medication on individuals are magnified when combined with a special diet or exercise.

One way to observe synergy in an organization is to observe the combined efforts of individuals working together. Synergy can result from the efforts of people serving on committees or teams. By combining their knowledge, insights, and ideas, groups often make better decisions than would have been made by the group members acting independently. Positive synergy resulting from group decisions may well include the generation of more ideas, more creative solutions, increased acceptance of the decision by group members, and increased opportunity for the expression of diverse opinions. Much of the current interest in teams and team building is an effort to achieve positive synergy through the combined efforts of team members.

Negative synergy occurs in groups, committees, and other joint efforts for a number of reasons. Groups commonly experience negative synergy because group decisions are often reached more slowly, and thus may be more expensive to make than individual decisions. The opportunity costs for having a group of high-paid executives spend an afternoon in a meeting rather than in more productive endeavors can be quite high. Negative synergy can also occur in group decisions if an individual is allowed to dominate and control the group decision. Also, groupthink—the pressure to conform—may cause the group to strive for harmony instead of evaluating information and alternative courses of action honestly and objectively.

SYNERGY AT THE ORGANIZATION LEVEL

Mergers and acquisitions are corporate-level strategies designed to achieve positive synergy. The 2004 acquisition of AT&T Wireless by Cingular was an effort to create customer benefits and growth prospects that neither company could have achieved on its own—offering better coverage, improved quality and reliability, and a wide array of innovative services for consumers.

Negative synergy is also possible at the corporate level. Downsizing and the divestiture of businesses is in part the result of negative synergy. For instance, Kimberly-Clark Corporation set out to sharpen its emphasis on consumer and health care products by divesting its tiny interests in business paper and pulp production. According to the company, the removal of the pulp mill will enhance operational flexibility and eliminate distraction on periphery units, thus allowing the corporation to concentrate on a single, core business activity.

The intended result of many business decisions is positive synergy. Managers expect that combining employees into teams or broadening the firm's product or market mix will result in a higher level of performance. However, the mere combination of people or business elements does not necessarily lead to better outcomes, and the resulting lack of harmony or coordination can lead to negative synergy.

I love the "Stronger Together" (being held up by people) picture shown on this page. Is it copyrighted or may it be used on a banner on an exercise program I would like to develop? Who do I need to contact? Please advise.
Thanks!