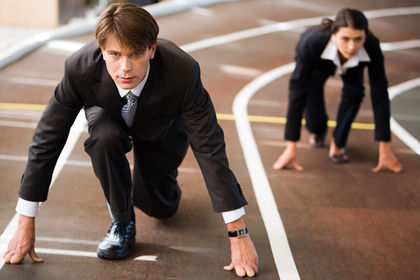 The widespread use of just-in-time production (JIT) and other advanced manufacturing techniques has been credited with providing such improvements as decreased inventories, set-up times, downtime and workspace. These decreases have yielded increases in inventory turns, equipment utilization, labor utilization, and ultimately, profit. Simply stated, this means that finished goods are produced and delivered just in time to be sold, subassemblies just in time to be assembled into finished goods, fabricated parts just in time to go into subassemblies and raw materials just in time to be transformed into fabricated parts. In effect, consumption of time has been reduced. While the JIT philosophy dictates that improvement in these areas be part of a continuous process, it does not have to stop there. Some firms have reduced the consumption of time, not only in the production area, but also throughout the system. Firms that manage this have gone beyond JIT and its competitive advantages. They have an advantage in time-based competition.

WHAT IS TIME-BASED COMPETITION?

JIT was the first manifestation of time-based competition. Time-based competition is the extension of JIT into every facet of the product delivery cycle, from research and development through marketing and distribution of the final product. Even quality, while still critical to success, is not the competitive advantage it once was in many industries. Manufacturing firms then have three strategic options: seek coexistence, retreat in the face of competitors, or attack (directly or indirectly). It has been said that strategy is and always has been a moving target. For some firms who choose to attack, this target has moved to speed and time-based competition.

The term time-based competition came into use with its appearance in a 1988 Harvard Business Review article entitled "Time-The Next Source of Competitive Advantage" by George Stalk, Jr. It was further defined in a series of articles and books written by consultants from the Boston Consulting Group.

Time-based competition is a broad-based competitive strategy which emphasizes time as the major factor for achieving and maintaining a sustainable competitive advantage. It seeks to compress the time required to propose, develop, manufacture, market and deliver its products.

In order to do this, the firm must change its current processes and alter the decision structures used to design, produce and deliver to the customer.

Time-based competition appears in two different forms: fast to market and fast to produce. Firms that compete with to-market speed emphasize reductions in design lead-time. In other words, the firm has the ability to minimize the time it takes to develop new products or make rapid design changes. Products fifty percent over budget but introduced on time have been found to generate higher profit levels than products brought to market within budget but six months late. Also, this form allows firms to gain a market edge by being able to consistently introduce more new products or large numbers of product improvements/variations faster than its competitors, thereby dominating the market. Sun Microsystems achieved leadership in engineering workstations by reducing (by fifty percent compared to competitors) the time required to design and introduce new systems. Additionally, these firms

are now moving further along the learning curve than the competition. Both factors ultimately increase barriers to entry by competitors.

Fast-to-product firms emphasize speed in responding to customer demands for existing products. Wal-Mart has been able to dominate its industry by replenishing its stores twice as fast as its competitors. Firms competing in this area focus on lead-time reduction throughout the system, from the time the customer places an order until the customer ultimately receives the product. This includes the ability to reduce the time it takes to manufacture products (throughput time) as well as the ability to reduce the time between taking a customer's order and actually delivering the product (delivery speed). These reductions in lead-time are usually accompanied by significant reductions in inventory levels. As with JIT, there is less rework, fewer supervisors, lower carrying costs, less overhead, and so forth, as well as enhanced quality and on-time delivery performance. Some customers, known as impatient customers, place a great deal of value on reduced lead-time. These customers are willing to pay a premium to get their goods and services quickly. This combination of lower costs and higher revenues contributes significantly to an improved corporate performance.

The production cycle encompasses order entry through the completion of all paperwork, through finished goods all the way to distribution of the final product. JIT methods greatly reduce the amount of time consumption from initiation of the purchase order through the transformation process, but improvement in these other areas have much potential. Studies have shown that few companies have value-added time in excess of 10 percent of average order cycle times. In fact, 95 to 99 percent of the time a product or service is not receiving value, it is waiting. Hence, time can be removed from any part of the product cycle.

Some firms have traced the complete order entry process only to find that it took longer to complete the paperwork than it did to manufacture the product. One major manufacturer compressed its manufacturing processes but still took months to convert a customer order into an approved order for manufacture. Time reductions resulting from JIT success are worth much less when orders sit at the retailer for weeks, float in the mail for a week, sit at the distributor for a week, float in the mail for another week and then begin the now shortened transformation process at the factory.

Paperwork is subject to the same delays. When paperwork moves in batches (similar to manufacturing), several days of delay can develop while the order sits in a stack awaiting enough volume for the batch to move on to the next stage in processing. Time-based competitors begin by eliminating all unnecessary paperwork. Incoming mail is categorized as fast or slow track, allowing the fast track orders to be handled immediately. Also, some firms structure the paperwork process so that transactions are handled one at a time, eliminating the delay caused from batch movement. A door manufacturer managed to refine its process to the point that it could price and schedule 95 percent of incoming orders during the initial customer call.

Frequently, when delays occur, the delay time is made up at the end of the product cycle. Obviously, the last place to make up for lost time is at the distribution and transportation stage (similar to the way a delayed airline flight might make up for delayed take-offs and manage to still land on time). If time can be reduced in these emergency situations, why not reduce it permanently and reap the benefits of time-based competition?

George Stalk, Jr. relates that a firm becomes a time-based competitor by accomplishing four tasks: (1) understanding the rules of response, (2) making value-delivery systems two to three times as flexible and responsible as its competitors, (3) pricing how customers value these capabilities, and (4) implementing a strategy for surprising its competitors with time-based advantages.

Philip Carter, Steven Melnyk, and Robert Handfield identified seven process strategies for implementing time-based competition. These include: system simplification, system integration, standardization, parallel activities, variance control, automation and excess resources. They feel that by identifying these strategies, they have developed a linkage between lead-time reduction and the tactics needed to achieve this goal.

Some time-based firms rely on technology (e.g., more productive machinery) to reduce lead times while others seek to streamline the system and its processes. For example, Japanese manufacturers focused on single-minute exchange of dies when setting up or changing machines. Still, others use techniques such as team building and alliance building to reduce time by focusing on integrating the various components of the supply chain. Hillman Willis and Anthony Jurkus, in a Review of Business article, note that some firms, such as Black and Decker, Ford and AT&T have found success by organizing teams to work, from the time of inception, on an entire family of new products. By bringing together people from product engineering, manufacturing, marketing, and purchasing throughout the development process and giving them the authority to make real decisions, enormous time and expense has been cut from new product efforts. Developing products and manufacturing processes simultaneously collapse time collapsed yet the manufacturability of the product is ensured. Also, this process facilitates the standardization of components across the family of products, thereby making them easier and less costly to assemble. Orders can then be filled by assembling the appropriate set of components, reducing both time and cost by as much as half. One firm has reported that an ad hoc cross-functional team took actions that reduced average cycle time from 18.1 hours to 9.4 hours. This 48 percent reduction in cycle time corresponds to a 92.5 percent increase in productivity.

Other firms are using cutting edge technologies, such as Stream-of-Variation Analysis (SOVA), to facilitate time-based competition. SOVA is a generic math model which integrates multivariate statistics, control theory and design/manufacturing knowledge into a unified framework to optimize manufacturing performance and identify and isolate causes of dimensional variation which occur during the pre-production stage of a product.

Time-based competition is a reality for many firms. Generally, these time-based competitors began by correcting their manufacturing techniques (often through JIT), then fixing sales and distribution, and finally adjusting their approach to innovation. Their strategy is based on the results of flexible manufacturing, rapid response, expanding variety, and increasing innovation. It is a metastrategy which improves performance through changes in the processes and structures used to design, manufacture and deliver products to the customer, thereby impacting overall firm performance (e.g., return on investment, return on assets). Motorola, Northern Telecom, and Toyota are but a few of the companies that have found ways to increase the overall value of their delivery systems through the compression of time.

One final word of caution: recent studies have suggested that time reductions that are not tied to viable business strategies can needlessly increase costs and dramatically reduce profits.