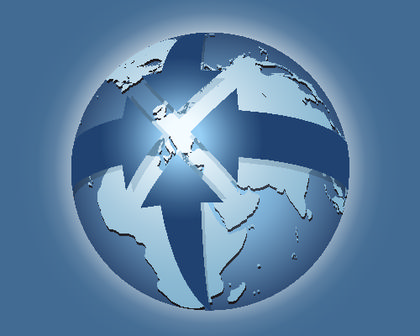 Distribution channels move products and services from businesses to consumers and to other businesses. Also known as marketing channels, channels of distribution consist of a set of interdependent organizations—such as wholesalers, retailers, and sales agents—involved in making a product or service available for use or consumption. Distribution channels are just one component of the overall concept of distribution networks, which are the real, tangible systems of interconnected sources and destinations through which products pass on their way to final consumers. As Howard J. Weiss and Mark E. Gershon noted in Production and Operations Management, a basic distribution network consists of two parts: 1) a set of locations that store, ship, or receive materials (such as factories, warehouses, retail outlets); and 2) a set of routes (land, sea, air, satellite, cable, Internet) that connect these locations. Distribution networks may be classified as either simple or complex. A simple distribution network is one that consists of only a single source of supply, a single source of demand, or both, along with fixed transportation routes connecting that source with other parts of the network. In a simple distribution network, the major decisions for managers to make include when and how much to order and ship, based on internal purchasing and inventory considerations.

In short, distribution describes all the logistics involved in delivering a company's products or services to the right place, at the right time, for the lowest cost. In the unending efforts to realize these goals, the channels of distribution selected by a business play a vital role in this process. Well-chosen channels constitute a significant competitive advantage, while poorly conceived or chosen channels can doom even a superior product or service to failure in the market.

For many products and services, their manufacturers or providers use multiple channels of distribution. A personal computer, for example, might be bought directly from the manufacturer, either over the telephone, direct mail, or the Internet, or through several kinds of retailers, including independent computer stores, franchised computer stores, and department stores. In addition, large and small businesses may make their purchases through other outlets.

If selling directly from the manufacturer to the consumer were always the most efficient methodology for doing business, the need for channels of distribution would be obviated. Intermediaries, however, provide several benefits to both manufacturers and consumers: improved efficiency, a better assortment of products, routinization of transactions, and easier searching for goods as well as customers.

In terms of efficiency there is an effect of diminishing returns as more intermediaries are added to the channels of distribution. If, in the example above, there were three wholesalers instead of only one, the number of essential contacts increases to 75: 15 contacts between five manufacturers and three wholesalers, plus 60 contacts between three wholesalers and 20 retailers. Of course this example assumes that each retailer would order from each wholesaler and that each manufacturer would supply each wholesaler. In fact geographic and other constraints typically eliminate some lines of contact, making the channels of distribution more efficient.

Intermediaries provide a second benefit by bridging the gap between the assortment of goods and services generated by producers and those in demand from consumers. Manufacturers typically produce large quantities of a few similar products, while consumers want small quantities of many different products. In order to smooth the flow of goods and services, intermediaries perform such functions as sorting, accumulation, allocation, and creating assortments. In sorting, intermediaries take a supply of different items and sort them into similar groupings, as exemplified by graded agricultural products. Accumulation means that intermediaries bring together items from a number of different sources to create a larger supply for their customers. Intermediaries allocate products by breaking down a homogeneous supply into smaller units for resale. Finally, they build up an assortment of products to give their customers a wider selection.

A third benefit provided by intermediaries is that they help reduce the cost of distribution by making transactions routine. Exchange relationships can be standardized in terms of lot size, frequency of delivery and payment, and communications. Seller and buyer no longer have to bargain over every transaction. As transactions become more routine, the costs associated with those transactions are reduced.

The use of intermediaries also aids the search processes of both buyers and sellers. Producers are searching to determine their customers' needs, while customers are searching for certain products and services. A degree of uncertainty in both search processes can be reduced by using channels of distribution. For example, consumers are more likely to find what they are looking for when they shop at wholesale or retail institutions organized by separate lines of trade, such as grocery, hardware, and clothing stores. In addition, producers can make some of their commonly used products more widely available by placing them in many different retail outlets, so that consumers are more likely to find them at the right time.

WHAT FLOWS THROUGH THE CHANNELS

There are also a number of support functions that help channel members perform their distribution tasks. Transportation, storage, insurance, financing, and advertising are tasks that can be performed by facilitating agencies that may or may not be considered part of the marketing channel. From a channel management point of view, it may be more effective to consider only those institutions and agencies that are involved in the transfer of title as channel members. The other agencies involved in supporting tasks can then be described as an ancillary or support structure. The rationale for separating these two types of organizations is that they each require different types of management decisions and have different levels of involvement in channel membership.

Given the importance of distribution channels—along with the limited resources generally available to small businesses—it is particularly important for entrepreneurs to make a careful assessment of their channel alternatives. In evaluating possible channels, it may be helpful first to analyze the distribution channels used by competitors. This analysis may reveal that using the same channels would provide the best option, or it may show that choosing an alternative channel structure would give the small business a competitive advantage. Other factors to consider include the company's pricing strategy and internal resources. As a general rule, as the number of intermediaries included in a channel increase, producers lose a greater percentage of their control over the product and pay more to compensate each participating channel level. At the same time, however, more intermediaries can also provide greater market coverage.

Among the many channels a small business owner can choose from are: direct sales (which provides the advantage of direct contact with the consumer); original equipment manufacturer (OEM) sales (in which a small business's product is sold to another company that incorporates it into a finished product); manufacturer's representatives (salespeople operating out of agencies that handle an assortment of complimentary products); wholesalers (which generally buy goods in large quantities, warehouse them, then break them down into smaller shipments for their customers—usually retailers); brokers (who act as intermediaries between producers and wholesalers or retailers); retailers (which include independent stores as well as regional and national chains); and direct mail. Ideally, the distribution channels selected by a small business owner should be close to the desired market, able to provide necessary services to buyers, able to handle local advertising and promotion, experienced in selling compatible product lines, solid financially, cooperative, and reputable.

Since many small businesses lack the resources to hire, train, and supervise their own sales forces, sales agents and brokers are a common distribution channel. Many small businesses consign their output to an agent, who might sell it to various wholesalers, one large distributor, or a number of retail outlets. In this way, an agent might provide the small business with access to channels it would not otherwise have had. Moreover, since most agents work on a commission basis, the cost of sales drops when the level of sales drops, which provides small businesses with some measure of protection against economic downturns. When selecting an agent, an entrepreneur should look for one who has experience with desired channels as well as with closely related—but not competitive—products.

Other channel alternatives can also offer benefits to small businesses. For example, by warehousing goods, wholesalers can reduce the amount of storage space needed by small manufacturers. They can also provide national distribution that might otherwise be out of reach for an entrepreneur. Selling directly to retailers can be a challenge for small business owners. Independent retailers tend to be the easiest market for entrepreneurs to penetrate. The merchandise buyers for independent retailers are most likely to get their supplies from local distributors, can order new items on the spot, and can make adjustments to inventory themselves. Likewise, buyers for small groups of retail stores also tend to hold decision-making power, and they are able to try out new items by writing small orders. However, these buyers are more likely to seek discounts, advertising allowances, and return guarantees.

Medium-sized retail chains often do their buying through a central office. In order to convince the chain to carry a new product, an entrepreneur must usually make a formal sales presentation with brochures and samples. Once an item makes it onto the shelf, it is required to produce a certain amount of revenue to justify the space it occupies, or else it will be dropped in favor of a more profitable item. National retail chains, too, handle their merchandise buying out of centralized offices and are unlikely to see entrepreneurs making cold sales calls. Instead, they usually request a complete marketing program, with anticipated returns, before they will consider carrying a new product. Once an item becomes successful, however, these larger chains often establish direct computer links with producers for replenishment.

J.K. Lasser Institute. How to Run a Small Business. McGraw-Hill, 1994.

Understand the distribution channel structure of coca-cola in nigeria. state whether it's direct or indirect sales and the type of middlemen in use.