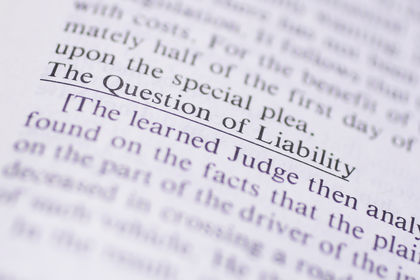 A liability is a debt assumed by a business entity as a result of its borrowing activities or other fiscal obligations (such as funding pension plans for its employees). Liabilities are paid off under either short-term or long-term arrangements. The amount of time allotted to pay off the liability is typically determined by the size of the debt; large amounts of money usually are borrowed under long-term plans.

Payment of a liability generally involves payment of the total sum of the amount borrowed. In addition, the business entity that provides the money to the borrowing institution typically charges interest, figured as a percentage of the amount that has been lent.

A company's liabilities are critical factors in understanding its status in any industry in which it is involved. As John Brozovsky noted in Journal of Commercial Lending , "a basic understanding of accounting for liabilities is necessary to assess the viability of any company. Companies are required to follow certain accounting rules; however, the rules allow considerable flexibility in how a company accounts for liabilities."

CURRENT LIABILITIES Current liabilities are short-term financial obligations that are paid off within one year or one current operating cycle, whichever is longer. (A normal operating cycle, while it varies from industry to industry, is the time from a company's initial investment in inventory to the time of collection of cash from sales of that inventory or of products created from that inventory.) Typical current liabilities include such accrued expenses as wages, taxes, and interest payments not yet paid; accounts payable; short-term notes; cash dividends; and revenues collected in advance of actual delivery of goods or services.

LONG-TERM LIABILITIES Liabilities that are not paid off within a year, or within a business's operating cycle, are known as long-term or noncurrent liabilities. Such liabilities often involve large sums of money necessary to undertake opening of a business, major expansion of a business, replace assets, or make a purchase of significant assets. Such debt typically requires a longer period of time to pay off. Examples of long-term liabilities include notes, mortgages, lease obligations, deferred income taxes payable, and pensions and other post-retirement benefits.

When debt that has been classified as long-term is paid off within the next year, the amount of that paid-off liability should be reported by the company as a current liability in order to reflect the expected drain on current assets. An exception to this rule, however, comes into effect if a company decides to pay off the liability through the transfer of noncurrent assets that have been previously accumulated for that very purpose.

CONTINGENT LIABILITIES A third kind of liability accrued by companies is known as a contingent liability. The term refers to instances in which a company reports that there is a possible liability for an event, transaction, or incident that has already taken place; the company, however, does not yet know whether a financial drain on its resources will result. It also is often uncertain of the size of the financial obligation or the exact time that the obligation might have to be paid.

Contingent liabilities often come into play when a lawsuit or other legal measure has been taken against a company. An as yet unresolved lawsuit concerning a business's products or service, for example, would qualify as a contingent liability. Environmental cleanup and/or protection responsibility sometimes falls under this classification as well, if the monetary impact of new regulations or penalties on a company is uncertain.