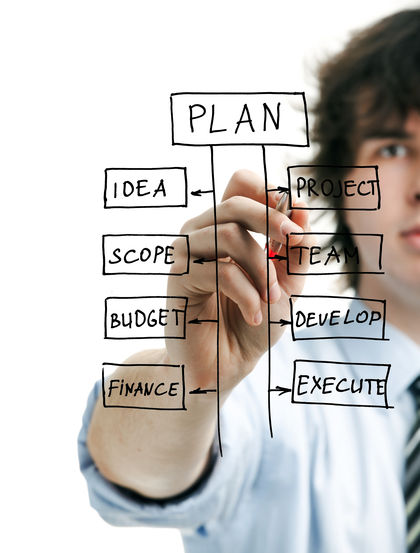 Capital expenditures are the allocation of resources to large, long term projects. The capital budget is a statement of the planned capital expenditures. It is more than a simple listing, however, and is not a "budget" in the usual sense. Given the nature of capital expenditures, the capital budget is best thought of as an expression of the goals and strategy of the firm. Creation of the capital budget is a central task that affects, and is affected by, all others areas of decision making. The "capital budgeting process" can be envisioned as shown in Figure 1. Present and anticipated business conditions are the opportunities and constraints from which the goals of the firm are developed. The goals drive the strategic decisions of capital budget and financing, but feasibility and consistency with the interdependent financing and capital budget decisions must be considered in setting the goals. Operating decisions may be thought of as the tactical choices driven by strategy, but again feasibility and consistency of operating decisions must be considered in setting strategy. The process is in actuality part simultaneous, part iterative. Given the interdependency of goals, strategy, and tactics in a changing environment, the capital budget is properly

considered as an active planning document, rather than a fixed conclusion.

From a narrow economic viewpoint creating the capital budget is relatively simple: a project should be accepted if the return is greater than the cost. Projects are listed in order of decreasing return, and investment should continue until the marginal return (roughly, the return to the next dollar spent) is greater than marginal cost (roughly, the required rate of return on the next dollar spent). This simple, elegant statement of the problem masks a number of complications. Projects of different risk will likely have different required returns, will be of different sizes and have different lives, and may be mutually exclusive or interdependent.

The rule of accepting projects until marginal return no longer exceeds marginal cost also assumes unlimited funds. This assumption is theoretically justified by the argument that if marginal return exceeds marginal cost, increasing the capital budget will return more than it costs, and more funds should be acquired. There are, however, a number of reasons for limiting the size of the capital budget. Project analysis is often based on individual projects, but overall firm performance will be degraded if too many new projects are attempted in a short space of time. Externally, lenders or investors may be unwilling to provide funds or may require added return or limitations on an overly ambitious management. Further, some attractive projects may simply not fit the goals and strategy of the firm. Investors and creditors may react adversely to new projects if they are inconsistent with the perceived nature of the firm. Since capital budgeting is the concrete expression of the goals and strategy of the firm, capital budgeting must often consider factors that defy exact measurement or even definition.

The marginal cost of the project is expressed as a required rate of return (sometimes called the "hurdle rate"). Estimation of the required rate is integral to evaluating projects and setting the capital budget. The controlling concept is that of opportunity cost. Opportunity cost reflects the idea that the relevant cost of using a resource is the rate of return on forgone alternative opportunities of similar risk. For projects that are extensions of or similar to the normal operations of the firm, and so have a similar risk profile, a readily available comparable use of funds is reinvesting in the firm itself. For these projects, the opportunity cost/required rate of return/hurdle rate can be approximated by the firm's weighted average cost of capital (WACC). The WACC is the rate of return that just meets investor expectations, leaving the value of the shares of the firm unchanged. WACC is computed by first estimating the rate of return required to meet the obligations for each source of capital. These required rates are then weighted according to the target capital structure of the firm to obtain the overall rate of return required to meet the combined obligations—the WACC. This is the return that could be obtained by reinvesting the funds within the firm (downsizing).

Where the project is outside the normal operations of the firm or has a different risk profile, the WACC is not be a good estimate of the required rate of return on the project. The required rate of return may be estimated by using the WACC for firms similar in nature to the project, or by applying capital asset pricing model at the estimated systematic risk of the project. These comparison-based estimates are satisfactory for projects of standardized technology that does not require that the firm develop new expertise. Where the project is nonstandard or innovative, or requires developing new expertise, such comparison may underestimate the risk. In such cases the required return on the new project must be arrived at by ad hoc adjustment. Decision tree, Monte Carlo, or other risk analysis tools are helpful.

Various techniques have been developed for application to individual projects. The simplest individual technique is the payback period—the time required for total cash inflows to equal total cash outflows. Projects are ranked according to payback period, and accepted if the payback period is below some maximum length. While simple to compute, there is no generally accepted method to set the maximum payback period, the time value of money is not considered, and cash flows past the payback period are ignored. An alternative is the accounting rate of return—the average annual change in accounting earnings due to the project expressed as a percent of the initial cost. This technique also has no generally accepted standard, fails to consider the time value of money, and is based on accounting earnings rather than on actual cash flows.

Discounted cash flow (DCF) techniques are preferable because they consider the time value of money, are based on actual cash flows rather than accounting profits, and have a definite standard. These techniques compare the rate of return from a project to the rate of return available on other investments of similar risk—a comparison of marginal return to marginal cost. The two widely used DCF techniques are based on the concept of present value. The present value of a series of cash flows is the amount that, if invested at the required rate of return for the project, will re-create the expected cash flows from the project.

While the IRR technique appears simpler to understand and apply, it can be misleading if there is a limit to the number of projects that can be accepted or if projects are mutually exclusive, so that a ranking technique is necessary. While IRR and NPV will always give the same accept/reject decision, the ranking of projects on IRR may differ from the ranking on NPV. This difference arises because of differences in the implicit assumptions about the rate of return on cash flows from the project. The NPV technique implicitly assumes reinvestment of cash flows at the required rate of return, while the IRR implicitly assumes reinvestment of cash flows at the IRR. The NPV criterion is considered superior because it is likely that the actual reinvestment rate will be close to the required rate. The IRR, on the other hand, may depart widely from the actual reinvestment rate. The reinvestment rate is also important when considering projects of different lives. It is possible that a long project of lower return may be preferable to a short project of high return if the cash flows from the short project will be reinvested at a low rate. Where information about the actual reinvestment rate is obtainable, however, both NPV and IRR can be modified to reflect this rate. This is accomplished by compounding all cash flows forward until the end of the project.

A further potential problem is that, where net cash inflows are required at some point during the life of the project, IRR becomes ambiguous because multiple solutions exist.

An accept or reject indication on the above criteria does not mean that a project should be automatically accepted or rejected. Many other factors need to be considered. First, the criteria are based on estimated cash flows and an estimated required rate. The estimates are themselves subject to uncertainty and this may lead to an increase or safety factor in the "hurdle." Second, as noted, the estimates proceed on an individual project basis, and there may be an interaction between projects. Third, and perhaps most important, the criteria consider only cash flows, and some factors cannot be reduced to a monetary basis. It must be remembered that a capital budget is in reality the strategy chosen to reach the goals of the firm. The indications of the quantitative economic analysis are only a part of the strategic planning process and are subsidiary to overall strategic considerations. Unless a project is compatible with the goals of the firm, it will not be accepted. Conversely, if a project has nonmonetary benefits or interaction with other projects, it may be accepted despite a negative indication. Again, the capital budget is a planning document. The greatest contribution of the application of the capital budgeting techniques is not the indicated decision, but the heuristic benefits of greater understanding.

Finally, ethical standards are a vital part of the strategic considerations. An otherwise acceptable project may be unacceptable on ethical grounds. The social impact of projects has become increasingly important. It is necessary to consider the externalities —the effects of the project that are not felt by the firm. Externalities include such items as environmental impact and required increase in infrastructure.