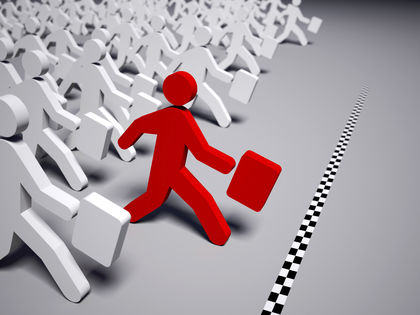 Employee turnover occurs when employees voluntarily leave their jobs and must be replaced. Turnover is expressed as an annual percentage of the total workforce. For example, 25 percent employee turnover would mean that one-quarter of a company's workforce at the beginning of the year has left by the end of the year. Turnover should not to be confused with layoffs, which involve the termination of employees at the employer's discretion in response to business conditions such as reduced sales or a merger with another company.

The severity of turnover varies widely by type of business and the economic health of the region where companies are located. Innovative high-tech companies and the most successful manufacturers frequently experience low turnover rates while fast-food restaurant managers expect turnover to be as high as 50 to 75 percent. As another example, coal mining companies in sparsely populated regions experience lower rates of turnover because there are few other job opportunities.

The prospect of getting higher pay elsewhere is one of the most obvious contributors to turnover. This practice can be regularly observed at all levels of the economic ladder, from executives and generously paid professionals in high-stress positions to entry-level workers in relatively undemanding jobs. However, there is considerable evidence that money is often not the root cause of turnover, even when it is a factor in an employee's decision to quit. Rather, some experts believe that high turnover persists in certain jobs and companies because they have an atmosphere in which employees look for reasons to leave, and money is a convenient and sometimes compelling justification. In one survey, for example, more than half of the respondents didn't even list pay in the top three reasons they believed people quit their jobs. Indeed, there is a whole school of thought that claims pay is not a direct determinant of job satisfaction.

Most environmental contributors to turnover can be directly traced to management practices. Turnover tends to be higher in environments where employees feel they are taken advantage of, where they feel undervalued or ignored, and where they feel helpless or unimportant. Clearly, if managers are impersonal, arbitrary, and demanding, there is greater risk of alienation and turnover. Management policies can also affect the environment in basic ways such as whether employee benefits and incentives appear generous or stingy, or whether the company is responsive to employees' needs and wants. Management's handling of major corporate events such as mergers or layoffs is also an important influence on the work environment afterwards.

Some turnover is demographically specific, particularly for women who are balancing significant work and family duties at the same time. Such women (or men) may choose to leave a company instead of sacrificing their other interests and responsibilities in order to make the job work out. Some women elect to quit their jobs at childbirth, rather than simply taking a maternity leave. Women's perceptions of their career paths might also be tinted by their awareness of the glass ceiling, which may lower their level of commitment to any particular firm, since they believe they're not in contention for top-level jobs. These factors translate into higher turnover rates for women in many companies.

Retirement of experienced employees can cause high rates of turnover and extreme loss in productivity, particularly in industries where there is little competition. For example, the National Aeronautics and Space Administration has expressed concern about its future launch capability as thousands of 1970s-era "'space race" engineers simply age out of the workforce.

Even seasonal changes such as the beginning of a school year can cause high turnover when part-time, school-age employees return to their classrooms. In this case, however, turnover is less likely to be unexpected by management. For instance, summer tourist-area restaurants likely staff up with college-age waiters knowing that they will leave by August.

High turnover can be a serious obstacle to productivity, quality, and profitability at firms of all sizes. For the smallest of companies, a high turnover rate can mean that simply having enough staff to fulfill daily functions is a challenge, even beyond the issue of how well the work is done when staff is available. Turnover is no less a problem for major companies, which often spend millions of dollars a year on turnover-related costs. For service-oriented professions, such as management consulting or account management, high employee turnover can also lead to customer dissatisfaction and turnover, as clients feel little attachment to a revolving contact. Customers are also likely to experience dips in the quality of service each time their representative changes.

The cost of turnover varies with the difficulty of the job to be performed. For example, in a food-processing company, showing someone how to put jars of jam into a cardboard box may take five minutes, so the cost of training someone to handle this job would not be high. If, however, the tyrannical manager of the food processing line at the company kept driving away food cookers and quality-control workers, the cost of constantly training employees in this critical area could be high.

In general, reducing employee turnover saves money. Money saved from not having to find and train replacement workers can be used elsewhere, including the bottom line of the company's profit statement. The U.S. Department of Labor estimates that it costs about 33 percent of a new recruit's salary to replace a lost employee. In other words, it could cost $11,000 in direct training expenses and lost productivity to replace an experienced employee making $33,000. Private industry estimates for highly skilled jobs peg turnover losses at a much higher level, up to 150 percent of the position's annual salary.

Some research studies have found that turnover from transient workers has lasting effects on loyal employees who stay with a company. One study tested productivity among workers who were exposed to a management-planted person who quit in the middle of a task, citing dissatisfaction with the job and the company. A second group of employees worked with another planted person who had to leave the task because of illness. The group exposed to the employee who quit had lower productivity levels than the group exposed to the ill employee. The employees apparently took the complainer's statements to heart while the ill employee had nothing bad to say about the company.

High turnover can sometimes be useful, though. Employers who are poor interviewers may not discover that new employees are actually poor employees until after the workers have been on the payroll for several weeks. Rather than go to the trouble and documentation of firing these underperforming workers, some companies rely on turnover to weed out the bad employees. When the learning curve is small and the consequences of always having inexperienced workers are minimal, high turnover may not be seen as a significant problem.

Caplan, Gayle, and Mary Teese. Survivors: How to Keep Your Best People on Board after Downsizing. Palo Alto, CA: Consulting Psychologists Press, 1997.

this article is amazing. It really helped me write a paper about employee turnover in the workplace. I will be referring back to this forum in the future! Thanks!!!
2
ronald

this was a great article, it also gave me a large amount of material when writing a paper. thanks. what year was it written
3
Danny Lim

Thank you for the information, great article. Appreciate it.