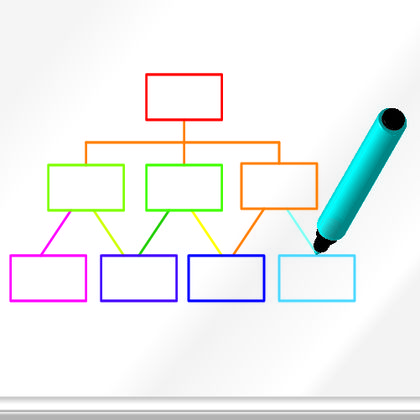 The chain of command principle is ancient, but its application to the management of organizations was only systematized in the twentieth century. Two individuals—the French engineer and executive Henri Fayol and the German sociologist Max Weber—contributed much to our understanding of this principle. In his book, General and Industrial Management, Fayol presented what have come to be known as the fourteen principles of management. These principles include both the unity of command (his fourth principle) and the scalar chain (line of authority). Fayol's principle of the unity of command holds that a subordinate should report to one and only one supervisor. Fayol believed that this was necessary to provide the supervisor with clear position authority, and to prevent a subordinate from receiving conflicting orders. Fayol's scalar chain principle states that authority and responsibility flow, one level at a time, in a vertical line from the highest level in an organization to its lowest level. This line of authority establishes an organization's hierarchy. Fayol believed that it was a management error to abandon the chain of command for no reason, but he also allowed for circumstances in which the chain of command might be bypassed for the good of the company. For example, Fayol suggested that communication delays might sometimes be caused by blind adherence to the chain of command and unity of command principles, and proposed what he called the "gangplank," which allows communications outside the chain of command as long as superiors are made aware. Weber also studied the problems inherent in large organizations, as organizations grew from family structures to much larger entities during the Industrial Revolution (1760–1850). Weber proposed the bureaucracy as a model of efficient organization. Bureaucratic characteristics have clearly defined hierarchies of authority and responsibility, consistent with the chain of command principle.

In many organizations, the chain of command principle is still very much alive. The manager's status is that of the deliverer of orders, and the employee enacts them under the monitoring of the manager. Both parties share responsibility for achievements. But, as Longnecker suggests in his book Principles of Management and Organizational Behavior, communication provides the underpinnings of this relationship. The discussions and meetings contact managers and their subordinates have may improve or harm the effectiveness of the direct report relationships in the chain of command.

A problem associated with the chain of command occurs when a subordinate bypasses a manager in either the giving of information or the requesting of a decision. This act undermines the authority and position of the manager who is bypassed. If this practice is allowed to continue in a bureaucratically-organized company, morale of the managers will decline. The urgency and frequency of these situations may, of course, mitigate the impact and inappropriateness of such contacts.