LEADERSHIP STYLES
AND BASES OF POWER 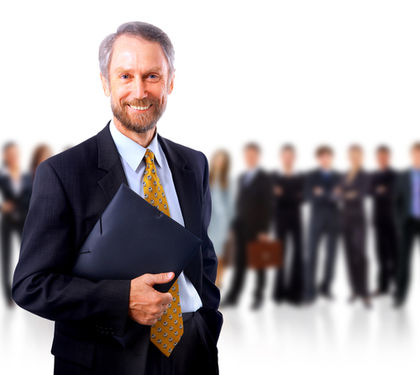 Studies of leadership styles are diverse in nature and multiple definitions have been offered. However, leadership style can be defined broadly as the manner and approach of providing direction, implementing plans, and motivating people.

Bases of power refer to the methods that managers and leaders utilize to influence their employees. When examining bases of power, the concept of authority must also be considered. These two are interconnected attributes tied to the behavior of superiors over subordinates. In their article, "Are There No Limits To Authority?", David Knights and Darren McCabe explain that "power should be understood to be a condition of social relations. Thus, it is erroneous to ask who has power. Instead, it is necessary to explore how power is exercised."

In turn, the nature of how power is exercised is a workable definition for authority. In short, authority and power are intertwined, with power being the ability to do things or have others do what one has ordered while authority is the foundation on which that power is built.

Three different styles of leadership were identified by Kurt Lewin, renowned social scientist, in 1939: authoritarian, democratic, and laissez-faire. His results indicated that the democratic style is superior to the other two styles. Attributes of each style are out-lined below

Since 1939, Lewin's research has been the basis for many further research studies and articles on organizational behavioral in theory and in action. Each leadership style can be appropriate depending on the environment within which it is implemented, the members of the group (employees), and the goals or tasks that are being undertaken by the group. Leaders may adjust their style of leadership to fit certain tasks, groups, or settings.

An authoritarian leadership style can be effective when a situation calls for expedited action or decision-making. Group members who are not self-motivated, who prefer structure, and appreciate significant direction and monitoring may thrive under this style.

A laissez-faire leadership style works best when group members are highly skilled and motivated, with a proven track record of excellence. This hands-off approach can allow these capable members to be productive and effective. The laissez-faire style is interpreted by the members as a sign of confidence and trust in their abilities and further empowers them to be successful and motivated.

Five bases of power were identified by French and Raven in 1960, which laid the groundwork for most discussions of power and authority in the latter half of the twentieth century. These five types of power are coercive, legitimate, reward, referent, and expert. Power can be manifested through one or more of these bases.

Coercive power rests in the ability of a manager to force an employee to comply with an order through the threat of punishment. Coercive power typically leads to short-term compliance, but in the long-run produces dysfunctional behavior.

Coercion reduces employees' satisfaction with their jobs, leading to lack of commitment and general employee withdrawal. In the United States, Canada, and Western Europe, coercive power has seen a decline in the last 50 years. Several reasons contribute to this, ranging from the legal erosion of employment-at-will and the awareness of employee violence or other forms of retaliatory behavior.

Equally important as an effect on the receding popularity of coercion as a basis of power has been the influence of quality management theorists, such as Philip Crosby and W. Edwards Deming. They suggested that there is a decline in productivity and creativity when coercive power is employed. The use of coercive power results in an atmosphere of insecurity or fear. In spite of this insight, coercion as a base of power continues to play a role even in those organizations influenced by theories of quality management.

In times of economic crisis or threats to the survival of the organization at large, coercion may come to the forefront. Coercive power may also materialize as organizations attempt to streamline their operations for maximum efficiency. If employees must be fired, those who fail to conform to the organizational goals for survival will be the most likely candidates for termination. The threat of termination for failure to comply, in turn, is coercive power.

Legitimate power rests in the belief among employees that their manager has the right to give orders based on his or her position. For example, at the scene of a crime, people usually comply with the orders of a uniformed police officer based simply on their shared belief that he or she has the predetermined authority to give such orders. In a corporate setting, employees comply with the orders of a manager who relies on legitimate power based on the position in the organizational hierarchy that the manager holds. Yet, although employees may comply based on legitimate power, they may not feel a sense of commitment or cooperation.

Reward power, as the name implies, rests on the ability of a manager to give some sort of reward to employees. These rewards can range from monetary compensation to improved work schedules. Reward power often does not need monetary or other tangible compensation to work when managers can convey various intangible benefits as rewards.

Huey describes Sam Walton, founder of Wal-Mart Stores, Inc., as an active user of reward power. Walton relies heavily on these intangible awards, indicating that "nothing else can quite substitute for a few well-chosen, well-timed, sincere words of praise. They are absolutely free-and worth a fortune".

When reward power is used in a flexible manner, it can prove to be a strong motivator, as Crosby, Deming, and others have shown. Still, when organizations rely too rigidly on rewards, the system can backfire. Employees may be tempted to unethically or even illegally meet the quotas to which overly rigid reward systems may be tied.

Another problem associated with rewards as a base for power is the possibility that the rewards will divert employees' attention from their jobs and focus their attention instead on the rewards dangled before them.

Referent power derives from employees' respect for a manager and their desire to identify with or emulate him or her. In referent power, the manager leads by example. Referent power rests heavily on trust. It often influences employees who may not be particularly aware that they are modeling their behavior on that of the manager and using what they presume he or she would do in such a situation as a point of reference.

The concept of empowerment in large part rests on referent power. Referent power may take considerable time to develop and thus may not prove particularly effective in a workforce with a rapid turnover of personnel.

One common error in applying referent power in cross-cultural situations, however, comes in misunderstanding the ways in which employees identify with their superiors. Since identification with one's superior in the United States is hampered by symbols of legitimate power (for example, titles or dress), those who advocate its use encourage managers to dress down to the level of their employees and use terms such as "facilitator" and "coach" coupled with "associates" and "group members" rather than "boss" and "subordinates."

In societies such as Argentina or Mexico, symbols of legitimate power may not readily hamper identification, whereas American-style egalitarianism may diminish the respect employees feel for the manager. In short, U.S. employees are likely to identify with managers by personally liking them and feeling liked in return, whereas Argentine and Mexican employees are likely to identify with managers by respecting them and feeling respected in return. Thus, referent power may be more cross-culturally variable than the other four bases of power laid out by French and Raven.

Imberman describes how specialized training is now used in the grocery industry to train Latino immigrants in the democratic supervisory techniques of U.S. managers. In the past, when these men and women were promoted to supervisory positions, they tended to rely heavily on the Latino model of authoritarianism under which they were raised. The managerial style hindered their ability to effectively supervise employees or to garner the respect they were seeking. To remedy this situation, specialized training programs are now utilized. The end result is effective and confident supervisors, motivated workers, higher productivity, less waste, and better customer service.

Expert power rests on the belief of employees that an individual has a particularly high level of knowledge or highly specialized skill set. Managers may be accorded authority based on the perception of their greater knowledge of the tasks at hand than their employees.

Interestingly, in expert power, the superior may not rank higher than the other persons in a formal sense. Thus, when an equipment repair person comes to the CEO's office to fix a malfunctioning piece of machinery, no question exists that the CEO outranks the repair person; yet regarding the specific task of getting the machine operational, the CEO is likely to follow the orders of the repair person.

Traditional theories such as those of French and Raven, as well as the empowerment advocates of the 1980s, such as Crosby and Deming, have tended to approach power and authority as one-dimensional. By contrast, several experts have more recently begun to reconfigure how power is viewed to a more multidimensional interweaving of relations or conflicting needs.

For example, Robert Grant et al. described TQM's consumer-focused goals and traditional management's economic model of the firm as two inherently opposed paradigms. Because these two paradigms are grounded in two independent sources of authority, they produce different but coexisting dimensions of power.

It has also been argued that authority is culturally based. Geert Hofstede, in one of the most thorough empirical surveys on cross-cultural influences on work-related values, delineated marked differences in what he called "power distance."

For Hofstede, power distance is the degree to which members of a culture feel comfortable with inequalities in power within an organization; that is, the extent to which one's boss is seen as having greater power than oneself. Thus, views regarding both power and leadership shape the conception of authority within an organization. And because both these facets of authority conception differ drastically from culture to culture, authority itself is conceived of differently from society to society.

Consequently, no single dimension of authority and power is likely to hold equally for all managers and employees in a multicultural domestic setting or in the multicultural milieu of the multinational corporation.

The ways in which managers influence their employees and encourage them to be productive depend on many variables, including the personality of the leader, the skills of the group/employees, the task or assignment at hand, or the group dynamics and personalities of group members. As with leadership styles, each base of power has its place in management and can prove effective in the right setting and right circumstances.

Along with leadership styles, there is much similarity and terminology crossover in the study of leadership theories; researchers should examine both terms in the available literature to access the full spectrum of knowledge on the topic of leadership.

Steensma, H., and F. van Milligen. "Bases of Power, Procedural Justice and Outcomes of Mergers: The Push And Pull Factors Of Influence Tactics." Journal of Collective Negotiations 30, no. 2 (2003): 113–134.

This is very good and vital information for learners and all who remove their reference from here it has saved us the trouble of going to very many sites and for this we are very greatful since weve expanded our knowledge well look forward to learning more from you.